skip to main | skip to sidebar

Game of two halves and fail continues to win

As to why the All Blacks have been playing so dismally. (Aside from the fact the Hurricanes broke half the best players, whoops, our bad) And that theory is something that is missing from the pre-match routine, administered by the captain, Richie McCaw.

No, no hear me out. If you were being told, by Richie McCaw, that he'll spank you if you drop the ball all the damn time, you wouldn't drop the ball. Unless you like that sort of thing. Then all he would have to do is threaten to put a stop to the spankings. Voila, the AB's suck less.

(Im not saying which spanking group I fall into. Its embarrassing.)
Posted by Brat at 4:16 PM No comments:

I have seen the future, and it is now!

I have seen the greatest spectator sport EVAR.

That sport is contortionist archery.

No shit. These women pull the bows with their toes, shooting arrows at targets. 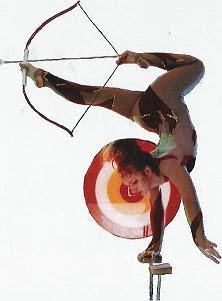 What else could match that? This sport has everything.
Posted by Brat at 3:21 AM No comments:

In the realms of unconciousness...

So, we are playing the French in Wellington tomorrow night, and I will indeed be going. (and stalking the French but that's a whole 'nother story.)

But, following Madame Backslash's lead, I thought I would include some more useful French phrases.

How much have you paid the referee?
Combien avez-vous payé à l'arbitre ?

In other, rugby related news,

While my workout was greatly enhanced by the chance to watch a dozen All Blacks get sweaty from my vantage point on the elliptical - Why was it on the day when I am wearing my sloppiest trackies and sweating like a pig?

P.S. At least we know they're doing something.
P.P.S. Corey Jane up close... Delicious.

PLUS - There's only seven days left to join my plane, do it, you know you want to.

As for the cricket - All I'm going to say is I feel a profound urge to find Marty Guptill and cuddle him. A lot.
Posted by Brat at 2:57 PM No comments:

Air New Zealand are doing the whole "fill up a plane and we'll take you to the rugby" thing again this year. Which I think is cool. So I've started a team, and instead of spamming yous all with emails from Air NZ, I thought I would make this post and encourage those reading it to click this link and include themselves in the plane.

The plane is naturally called "The Cheap Seats". And i get to be in CHARGE mwahahaha.
Posted by Brat at 3:05 PM No comments:

Well, it was a game of two halves and Fail was the winner on the day.

I didn't cry, impressively enough. Mostly because I had the entire game to get used to the fact we were going to lose.

Okay, so did the referee. Hard. And in the second half, so did France, a bit.

But we couldn't hold onto the ball, and in the first half, the French got every turnover that was going and several that weren't. They played the referee better than we did, and also actually seemed to know what the rules were.

So, basically, the French deserved to win.

They are also FUCKING HUGE O M G!!! I don't know quite what they eat in France, but those boys have certainly been eating a lot of it. This means that when they tackle something, it stays tackled. Which was something we didn't manage, which meant they scored, a lot.

Really, I don't know if we will be able to pull it back in just a week. Our second half was certainly better than our first, thanks to Graham Henry gave the boys a kick up the jacksie so hard they'll be tasting dubbin for days, but our inability to gel will probably take a bit longer to fix.

And you know whats even worse? I think they're better looking than we are... In a Eurotrash kind of way, of course.


Edit because a performance as bad as this one does not deserve it's own post,

Why did you bat first at all? Why keep sweeping? How the fuck did you manage to get all out?

No love for at least three days,
Brat.

P.S Highlight of the match - Brendon McCullum taking out Marty Guptill. Honestly if the All Blacks had tackled like that they might have won.
Posted by Brat at 2:06 AM No comments:

The All Blacks are playing France at Carisbrook tonight. I won't be going because it's no fun without the Brat, who is still suffering from a case of Wrong City Syndrome.
For those of you who are attending, here are some helpful terms that may assist in your enjoyment of the experience, with thanks to Babelfish for translation.
Your mum wears combat boots!
Votre maman porte des bottes de combat!
All of your base are belong to us!
Toute votre base sont appartiennent à nous!
For great justice!
Pour la grande justice!
Oh my god, there's an axe in my head!
Oh mon dieu, il y a une hache dans ma tête!
Jesus Christ, it's a lion! Get in the car!
Jésus-Christ c'est un lion! Obtiennent dans la voiture!
You are a velocipede!
Vous êtes un vélo sur rail!
The pen of my aunt!
La plume de ma tante!
Posted by Madam Backslash at 11:55 AM No comments:

And yes, Coney has proved me right. He's just come out with this gem "Connell is from the same area of New Zealand as Ewan Chatfield - steady, dutiful horse that he was."

Seriously. Why is this man constantly comparing other cricketers to things you ride?

And I've been told I'm not allowed to say awful things about Jesse Ryder's groin infection. So share your best joke with me!
Posted by Brat at 3:53 PM 2 comments:

We nearly had one of the great upsets of world sport this morning. The All Whites squared up against Italy, one of the towering colossi of the soccer world, for a friendly match in Pretoria.
With the score at 2 - 1 to the All Whites at half time, yours truly was holding her breath (always fun when trying to work) waiting to hear whether or not they would prevail.
Sadly the answer was no, with the final score 4 - 3 in favour in Italy.
A round of applause (and a round at the pub, hopefully) to the All Whites -- scoring any goals against Italy at all is an achievement, never mind scaring them the way you did.
You've made this Kiwi proud.
Posted by Madam Backslash at 11:39 PM No comments:

Labels: all whites, balls, heroes of the revolution, soccer, yay

I thought Sky, quite rightly, stopped giving Jeremy Coney a platform from which to say stupid things?

Wonder if he'll be calling Brendon McCullum a velocipede again. Cos how does Coney know that Baz is the team bike?
Posted by Brat at 9:54 AM No comments:

I have Australian friends, I know they love their cricket team. So Muffin, Dan, Maddy, avert your eyes now...

On the down side, this means we now have the ugliest uniforms remaining in the tournament.
Posted by Brat at 3:23 PM 2 comments:

So, due to excessive MySky fail, I didn't see us have a wee wobble against Scotland, although I hear some of it was rather good. I also think having a game decided by seven overs of slog is retarded and indicative of the silliness that is twenty20 in the main. Although I am totally loving the upsets (well done the Windies!) I remain sceptical that this is the future of cricket.

And, for something completely different- Barbarians were funny and Luke McCalister seems to have eaten all the pies.
Roger Federer is now the best tennis player evar and I'm going to have to listen to the Mothership rhapsodising over him for a long while.
And, I'm over Jenson Button winning as the BBC commentators are becoming the most obnoxious things to ever grace the airwaves.
Posted by Brat at 2:48 PM No comments:

Why does my predictive text have 'fielding' but not 'field'?

So, we've got some cricket back, and the real rugby is just about to start - And I'm mostly wondering why they all have one season, but there you go.

The All Blacks are failing already this season - Richard Kahui is broken and with Dan Carter and Richie McCaw out we are not sure who will be bringing the sexy back for the AB's this year. Lets hope we find someone, or the Springboks will take out the tri-nations pretty award.

And I would like it put on record that we have to stuff the French in no uncertain terms or I will cry.

Annnnnnnd, onto the cricket - and for your daily installment of WHAT THE FUCK? England lost the opening match. Against the Dutch. Yes, I did a double take too. There are only four professional cricketers in that team, and the English have squizillions at their disposal. I dont know what happened, so would someone like to fill me in?

NZ play Scotland tonight, and if we don't win, I suggest all test-playing nations should pack in this twenty20 bullshit and go play tests, lest we all be deeply embarrassed.

And from the "Are we sure they werent playing cricket?" files, The New Zealand juniors rugby side beat Uruguay 75-0. Hat-trick hero was one (cleanly shaven) Zac Gilford. Yay.

Annnnnd lastly, the Cheap Seats would like to bid a not-especially-fond farewell to Andrew Symonds, who after further behaving like a drunken monkey has been sent home with his contract in tatters. After what he (drunkenly) said about our Brendon McCullum on the radio, I can't say we're sad to see him go. Well, I could, but it would be a lie.
Jesse, this is what happens when you don't get a clue. We're kinda glad to see you getting a clue, really.
Posted by Brat at 2:05 PM No comments: