skip to main | skip to sidebar

Im only sniggering a little bit

Okay, I didn't actually watch the Super 14 final. Roland Garros was on, see, and my mum is in charge of the telly when it comes to all tennis related matters.

And, I didn't actually care that much...

But it seems the Chiefs got utterly and comprehensively pwned. Which is embarrassing, as they're supposed to be the best this country has to offer. Can we blame Suzie?

With Richie McCaw still a bit stuffed, and Scott Waldrom broken into three pieces, who the AB's openside will be is interesting. Whether Rodney So'oialo will get the nod as captain is also interesting. Who the frick we're going to put at lock will be furtherly interesting.

I think we should send a big "Get Well Soon" card to everyone who got broken by this years Super 14. Why are they expanding it again?

And in other, vaguely annoying news - Chelsea won the FA cup.
Posted by Brat at 5:27 PM No comments:

In Which We Are Officially Underwhelmed

Well, that sucks.
Both the Hurricanes and the Crusaders lost, meaning the final will be in Pretoria between the Bulls and the Chiefs.
This leads to a dilemma. The Chiefs are the Chiefs and the Bulls are South African, so it all comes down to which team we want to lose the least.
We at the Cheap Seats have this thing about supporting the underdog. The Bulls are going to be on their home turf, and it's the opinion of both the Brat and I that they are the stronger team, so here it is...
GO CHIEFS, we suppose.
At least they have Richard Kahui.
Posted by Madam Backslash at 2:24 AM No comments:

But having never been to Hamiltron, City of the Future, before, I am finding it to be pleasant, warm and the stadium to be entirely awsome in a way that is reminicent of Athletic Park.

The game rocked too. All of it was exciting, but I knew when that fog rolled in that we would come off second best (Christchurch, anyone?) Those 'Canes need to learn to play under pressure, and not drop the ball all the damn time. Perhaps it was because they shaved. We, the public, are glad they shaved, however. I was also very impressed with the refereeing, and just... it was oarsome. The whole thing. Except the losing.

Then there was drinking. And now I am in a state that is not hung over, just merely over.

And now Im going to yell at the Crusaders tonight, because, well... We cant have a final in Saffrica, can we?

Enter... Cricket. The hit-and-giggle World Cup is coming up (I know because Iain O'Brien said so in his blog) And I would like to take a vote on whether it actually really matters. I vote no, because our uniforms are so silly.

Annnnnnd Because it's tangentially related to Twenty20 cricket (he does play it after all) here's Aiden Blizzard. 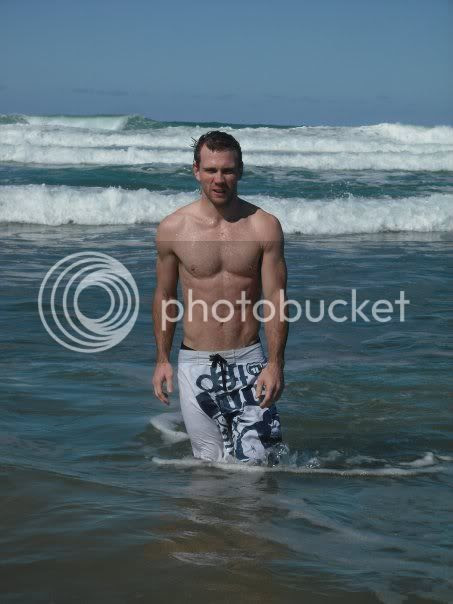 See, if he had been in that calendar, I woulda bought it.
Posted by Brat at 4:28 PM No comments:

So it's Super 14 semi-finals weekend. The Brat has gone to Hamiltron, City of the Future, for the Chiefs vs Hurricanes game, where she reports she has found a bar with free bubbly for girls and a free bus to the game. (She always lands on her feet, does the Brat.)
The Cheap Seats' pick for this match is the Hurricanes, for two reasons:
1. They're the Brat's home team.
2. If they lose it means the Chiefs are in the final, and well, come on.
The other semi-final is in Pretoria tomorrow, between the Bulls and the Crusaders. Our pick for this match is the Crusaders, also for two reasons:
1. They're my home team (yeah yeah I've lived in Otago for 20 years, but they're still my home team, okay?).
2. If they lose it means the Bulls are in the final. And we just can't have that, can we?
Brat and I have a mutual support agreement in place for this set of fixtures -- I'll support the Hurricanes for the first semi and she'll support the Crusaders for the second.
If they meet in the final, all bets are off.
Posted by Madam Backslash at 12:04 AM No comments: